There are people who suffer from tinnitus (or roaring, hissing, buzzing, or ringing) in their ears that can block out outside sounds and conversations. Loud noises, music, ototoxic medications, earwax buildup, allergies, sinus or ear infection, congestion, misalignment of the jaw (TMJ disorder), cardiovascular disease, Meniere’s, auditory nerve tumors, otosclerosis, hypothyroidism, head or neck trauma, and even dehydration can cause it. 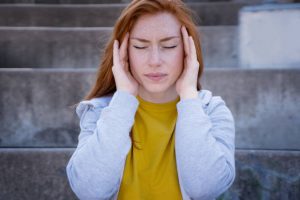 The delicate bones and tissues in the ear are very sensitive to dehydration, even though 70 percent of the body is water. The bones that “listen” become rigid when the tissues dry out. The imbalance in fluids can damage the tiny hairs in the cochlea of the inner ear. A lawnmower and rock concerts can also cause damage. It is possible to damage MP3 players even with a volume that is too high. In a noisy environment or if you drink too little healthy water, the damage can become permanent. Drink plenty of water, not coffee, fruit juices, carbonated beverages, or bottled water, if you suffer from chronic dehydration.

You should drink more water and avoid loud noises for a few days if you have tinnitus after a loud noise event. The ring shouldn’t become permanent. You should avoid alcohol, recreational drugs, caffeine, aspirin, and nicotine if you experience persistent ear noises. Tinnitus can be made worse by aspirin and certain antibiotics, but your doctor can help you adjust the dose or make substitutions.

Drink plenty of healthy water if you run or play sports. As much as dehydration can aggravate tinnitus, overheating can as well.

Researchers have used magnetic resonance imaging to detect brain activity in people with tinnitus in recent years. Hyperactivity has been detected in certain parts of the limbic brain and the auditory cortex in people with noise in their ears. Emotions and anxiety are controlled by the limbic brain in response to stress. In tinnitus sufferers, the part of the brain responsible for fearful emotions is overactive, not that tinnitus is stress-induced.

Scientists and medical professionals have been wondering where the “doorbell” is for a long time. While they knew that people could “hear” the noise, they wondered whether it was in their ears or in their brains. As sound passes from the ear to the brain and central nervous system, noise is believed to arise. When hearing is assaulted by loud noises, even for short periods, and there is trauma, the brain compensates by turning on its own amplifier. Like a shortwave radio, you hear more sound and more hissing. Tinnitus has long been a mystery, but now scientists are beginning to unravel its mysteries with the help of MRIs.

There is promising research being conducted in Germany and Belgium with transcranial magnetic stimulation for some patients. An auditory cortex magnetic plate is placed just above the ear and held there. Electrical current pulses through the plates are believed to disrupt and possibly even reset faulty brain signals. A painless 5-30 minute session does not require anesthesia, but the equipment is expensive and only available at major neurology centers.

There have been some interesting developments in the pharmaceutical industry over the last two years. An injection of lidocaine, an anesthetic, into the bloodstream of a tinnitus patient was considered a very dangerous procedure. For five minutes, there were no symptoms. Researchers discovered that there is an off switch somewhere in the brain, even though this is not a recommended treatment. It is now being actively sought by investigators.

Several of my clients have lost their tinnitus after drinking alkaline ionized water in my clinic. His chronic dehydration level was the benchmark for how long it took to disappear. A dehydrated body creates all sorts of symptoms, including ringing in the ears, because of acidic conditions that are associated with dehydration. Take my 7-day water challenge. You’ll feel better for it, and it’s free.